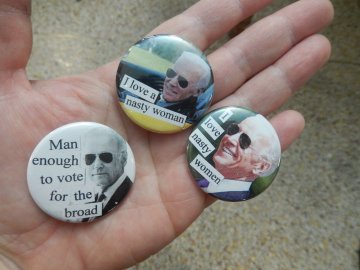 It is possible there is a rule that businesses are supposed to be neutral however Laura would categorize such neutrality as disingenuous. If you look at how people spend their time and their money, it is usually not neutral. And while we wholeheartedly believe that our store is open to everyone, that we share our creativity and our inspiration with everyone, we don't expect to agree with everyone, nor do we expect everyone to agree with us. And to say we are neutral is to pretend to be something other than what we are.  As Wisconsinites, Madisonians and Christians, we've always had a particular lean to the left. We believe in the American ideals of liberty and justice for everyone, even as we acknowledge that civil rights are often granted unevenly. We believe that everyone is a child of a creating God but that's more of a metaphorical attitude. So, yes, we believe in science and evolution. All that said, the lean to the left was within the context of our already liberal upbringing - it is a part of who we are but we weren't strident about it. At least not at first.

We opened Anthology in the spring of 2008. Sachi made little 1" buttons for Obama. Initially each individual button was composed of a tiny scrap of paper (with text like "smart women for Obama") and a vintage picture of a woman. Very quickly we realized she wouldn't be able to keep up with demand and we started taking originals to the copy shop to make copies.  They were a small trinket, impulse buy in a small dish near the cash register. We did fill the back table with buttons closer to the November elections but I don't know that we thought much beyond then.

And that was about it. Until 2010, when the election for Wisconsin's Governor was held. We had campaign buttons for Tom Barrett, but the enormity of the situation didn't really sink in until Scott Walker was sworn in as Governor and promptly set about decimating everything we hold dear about this state. The Wisconsin Uprising is typically cast as related specifically to the unions and to labor, but it was much larger, as it was a response to attacks not just on the public school system, but the way the wealth of Wisconsin was to be distributed, who had access and power, how our natural resources were to be managed. The list goes on. In the early weeks of Scott Walker's first term, there was much to protest. At first, we felt our role was more as witness and support and participant - our concern was on behalf of our customers and our selves, the children and citizens of this state, as well as the natural resources. All of that is to say that we didn't really look at this as a business opportunity. However, everyone knew where we stood politically and it was only a week into the protests when a customer came in and asked us if we had buttons. We hesitated, mostly because it seemed a little opportunistic, but when I expressed hesitation, a friend on Facebook said, "make those buttons, girl! Union people love buttons!" And so it began. For most of that year, the back table was filled with buttons. We had lively Saturdays when the protests reached the tens of thousands, when the store was crowded with people carrying signs and stopping to pick up their buttons. For us, making buttons became therapy - Scott Walker would do something horrid and we would come in the next day and make up some new buttons. There was certainly a feeling that we were not being listened to, but we were gathering and we were listening to each other, and buttons were part of our voice.

Flash forward to 2017... and now the task has just gotten more immense, not just the bounds of our state, but of our nation. We are very much committed to speaking and standing up, and believe that the best interests of our store, our city, and this nation, are served when every single person is able to reach the best of their ability. It might seem little, but buttons for us have become a way for us to express ourselves (when it often feels that politicians aren't listening), a little bit of instant-gratification therapy (pretty satisfying to press out a button in response to Trump's latest comment), and a way for people to connect with others and to acknowledge that they stand together, to realize they are not alone.